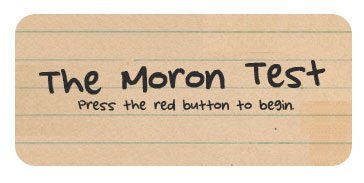 The moron test game is one of the most popular android games out there, and not only popular this game is also one of the android market favorite. According to the some source, the moron test game is also in the list as one of the top selling mobile games of all-time, which is such an impressive record for this game. To prove it’s popularity, this game already has millions of players all over the world and becoming one of the most popular and widely known mobile games worldwide. The simple and addicting gameplay in this game is the main attraction why many people love this game because that makes this game to be really fun to play with your android device.

The moron test game is included in the category of brain and puzzle game. This game will challenge your creativity and intelligence with the tricky challenge and fun puzzles that you need to solve. The challenges in the game are really fun to play and the puzzles are really addicting to solve. The puzzle in this game may seem quite simple at the first time you see it, but no, you will need to struggle quite a bit in order to solve the puzzle because it’s really challenging. This game features five sections in the game that contains hundreds of fun puzzles that you can solve. To make things more interesting, this game also features fun music, brilliant sound effects, along with numerous funny characters that you can choose.

This game also make you to be connected to the players all over the world to see which person has the highest record for the game. It is possible because the game features global leaderboards and achievement. And if you interested to play this game you need to spend $0.99 on Google play in order to enjoy this game. You need to have android version 1.6 or up to run this game on your device.