Ipad mini being produced, will compete with the Nexus 7

A picture of a mock-up iPad Mini reappears in cyberspace. In the latest mock-up picture, the iPad Mini paired with a 7-inch tablet with others, Kindle Fire HD and Google Nexus 7. From the mock-up known how much the actual size of the iPad Mini. As quoted from Apple Insider, the dummy of the iPad Mini has a thickness of 7.69 mm, thinner than the third-generation iPad with size 9.91 mm thick. 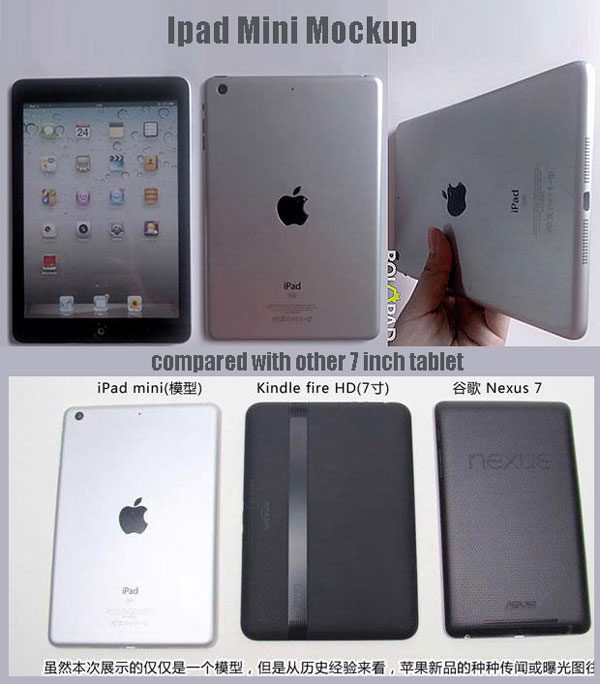 In addition, the dummy iPad Mini has a size of 5.3 inches wide and 7.87 inches tall. In comparison, New iPad has a 9.5 inch height and 7.31 inches wide. From the picture comparison, the iPad Mini look thinner, when compared to Kindle Fire HD and Google Nexus 7. In addition, these devices also appear higher than both the tablet device.

According to Apple Insider, the iPad Mini will likely come with a screen size of 7.85 inches. The screen will support a resolution of 1024 x 768, same as iPad 2. By the same resolution, the developer has no need to make modifications to the applications.

From earlier reports, Apple is rumored to be introducing the iPad Mini on October 17. Meanwhile, the market release date is scheduled for November 2. IPad Tablet with mini size is reportedly being manufactured by Foxconn and Pegatron since mid-September 2012. On price, the early rumors say the iPad Mini will be priced at U.S. $ 300 or more depends on the storage.