Doors&rooms 2 walkthrough now we want to start with new chapters 1 after try the tutorial mode we can use the key to start first chapter, if you ever play the first version then you already know that gameday created game in a high quality freemium game in this version  you can buy key, gems, or unlock the next level using real money that’s why this game is freemium it’s because you can buy an object using real money and used into a game, good concept for a smart game developer, this game not yet available at the android market, may be in next few week you can play it using android or wp but now only iphone, ipad and ipod user can play this amazing game.

Doors&rooms 2 chapter 1 stage 1. slide screen right to see a number on the wall remember the number 4653, slide screen left then tap safe open with code 4653, pick up key and medal use key to open door beside number. 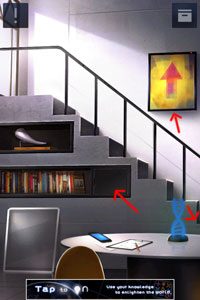 Doors&rooms 2 chapter 1 stage 2. pick up battery on the table, open cabinet above the Smartphone pick up remote then combine with battery, use remote to open secret container behind up arrow painting, pick up key     then use to open door. 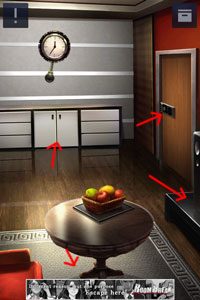 Doors&rooms 2 chapter 1 stage 4. pick up knife at the table, slide screen left then use knife to cut blue pillow and pick up card, go to table near window tap box and complete the jigsaw / puzzle, pick up chip then combine with the card, now use card to open door.