94 percent answers for this questions : imaginary creatures , jobs that involve travelling, couple build furniture, English words starting with “y”, cooking terms used in recipes, pyramid picture, slang for “money”, it’s blue, cat inside bucket picture, a pot of, something you celebrate, squirrel picture, things found in a tube, a … table, horseshoe picture.  This game only available for android and iOS, this post created for the gamer who play using android because the iOS version still available until level 55. Every device has different question arrangement so if you did not found the answers in this post just find it in other 94% answers which also available in levelstuck.com. 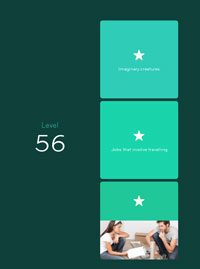